Radio Days And The Boob Bubble Radio Days And The Boob Bubble

Outside. Directly opposite. Big Ben has chimed a big fat 9 am.

St Thomas’s radiotherapy unit. This is my home away from home for the next 23 consecutive days – excluding weekends – cancer doesn’t do weekends – thus resulting in my appointments being drawn out and clashing with my beloved Glastonbury Festival. Nooooooooo. To go during radiotherapy or not to go? That is the question.

I look around me at a sea of white hair. Bloody hell. Everyone’s so old. I don’t want to get that old. So old some of these patients look like they’ve been wheeled in from the set of Dr Who. Fossilised and mute. Why are you here?! What’s the point of prolonging your life?! What quality of life are you going to actually have? Yeh the heart’s still beating but everything else is buggered. I’d just like to reach 50 please universe. No more, no less if that’s not too much to ask. As I contemplate this, I notice an elderly patient smiles at me…. and doesn’t stop smiling at me.

Bridget is 80. She’s a sweetheart and there to have her pelvis done. She tells me her ENTIRE medical history, then lowers her voice to almost mouth the words…

“Once my radiotherapy finishes I have to stick several medical objects up my…….!!!!”

Bridget gets called to her appointment.

It’s been two months since I finished chemo. Three weeks after chemo I had a re-excision – usually it’s meant to be 4 weeks but my surgeon fast tracked me so I had a chance of making it to Glasto. Priorities man. I love my surgeon. A re-excision is basically more surgery to remove a bit of skin in my boob that was touching the tumour. This is called the ‘margins.’ Imagine my tumour is a fried egg sunny side up. Which is appropriate really, seeing as my tits look like a couple of fried eggs. The tumour is the yellow yolk and the margins are the egg white. Everything has to be removed. The surgery is done using the naked eye. My dear surgeon thought he’d removed the whole fried egg in my first round of surgery (I had a lumpectomy.) But the pathologist (who’s job is to cut and examine the juicy lump of tumour tissue) found he’d only removed three quarters of the margins. So he went back in there and cut the last bit of the quarter out. The results came back clear. No traces of cancer. Boom.

Three weeks after the re-excision I go in for my radiotherapy pre-assessment. I lie on the measuring table. The nurses tattoo 3 tiny dots (the closest I’ll ever get to being cool.) One in the centre of my chest and the other two either side of my boobs. This is so the measurements are completely precise. Radiation is hardcore. It’s so strong that not only will it kill any cancer cells, it also kills the healthy cells and can potentially damage my ribcage and my lung as it zaps the shit out of where my tumour was and the area directly around it. It kind of reminds me of a microwave nuking my insides. This is why the radiotherapists don’t want to damage any more of me than is necessary, hence the exact tattooed measurements.

“Have you had an implant?” asks the nurse.

“Do you think my boobs would be this small if I had implants?!”

The nurse titters “Yes you have a point” and carries on the examination. A confused look comes over her face.

“Mmmm there seems to be something in there. But don’t be alarmed.”

She proceeds with my CT scan.

“OK Lara. Just looking at your scan, it appears you have an air bubble stuck in your breast.”

“I’ve never seen it before. It must have got trapped in there after surgery. I think it’s best you get it seen to before you start radiotherapy as it could effect things.”

I get dressed and have a good feel.

Yep, there’s a large air bubble in my boob. Not dissimilar to a giant freaking piece of bubble wrap.

I book an appointment with my surgeon. My breast care nurse comes along for moral support. The three of us sit there. And giggle. Neither of them had heard of anything like this before. After sticking a syringe in it (I didn’t deflate like a balloon whizzing round the room sadly) the doc shows me what he’s drawn out. A tiny bit of red goo. Barrrfffff. But the bubble’s still there.

An ultrasound later (that doc had never seen anything like it either) I carried on my merry way with the advice “it should eventually absorb back into your body.” And sure enough, a week later, it did. Bubble tit drama over.

So, back to the radiotherapy unit. I’m lying dead still. All Saints ‘Never Ever’ is playing. Never ever as a 14 year old listening to that song did I imagine myself lying here half naked looking like Sigourney Weaver in Alien about to have my tit nuked.

Brrrrrrrrr it’s always so cold in here. They crank the air con up to keep the equipment cool. My nipples are like pistols. I almost expect the radiotherapist to halt dead and stick her hands up on entering and seeing them!

The lovely radiotherapists walk in.

“Hang on a minute. I’m half naked. At least you’re all wearing clothes! My nipples are like bottle openers!”

They all chuckle. I am quite funny.

The radiotherapists dash out of the room – they can’t be anywhere near the machine when it’s in action. I mean who wants to be near a machine that transmits radiation and can potentially cause cancer?

As I lie there on my back, arms stretched up over my head, nipples you could hang a coat on, I think about how at ease I’ve become with being naked in front of all the nurses and Doctors. At least this is a flattering position. It’s certainly the most pert they’re ever gonna look.

The 23 days are a jumble. It takes more than cancer to stop me from going to Glasters. Friday morning straight after rads I set off with my wellies and sequins. It was the best weekend ever, spent laughing and dancing with my wonderful friends who surrounded me with LOVE. I’ve never done Glasto sober before. Who needs alcohol and narcotics when you can have vegan sushi and a gong bath?!

On Monday, full of happiness and my yearly Glasto rebirth of life (I promise you, no narcotics) I drove straight from Worthy farm to the hospital, covered in glitter and grinning from ear to ear in time for my LAST radiotherapy session. 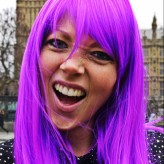