After an exhausting eight hours of pulmonary (lung) function testing, the head pulmonologist at one of the country’s top pulmonary function labs in California, handed me the written results of my performance, and explained the series of tables and graphs.

“You lost 40% of your lung tissue, and according to these tests, the 60% of tissue that you do have is working at 50% for an average woman your age,” said the esteemed pulmonologist. “But it’s probably not that bad,” he continued. “Asians usually have smaller lungs anyway. Our data is adjusted for African American and Hispanic, but not Asian … so, not sure how much smaller, but like I said, probably not as bad as it looks.”

I had waited months to get into this renowned pulmonary function lab in hopes of solving for my post-treatment chronic fatigue and shortness of breath, not to mention, suffering through an exhausting day of – lock yourself in this oxygen chamber then that, breathe, breathe, breathe, hold, hold, hold, blow, blow, blow, pinch your nose then don’t, push on your cheeks, then puff them out, cycle on your butt, cycle on your back, blood pressure now, blood pressure later, let’s listen to your lungs, wait, wait, wait, now walk, now stop, now ohmygahhh I really can’t breathe anymore! – just to generate this so-called-scientific report of how I have crap for lungs that are maybe not so crappy when you think about it. Well, at least they adjusted for age, which doesn’t usually happen for young adults treated in oncology settings that typically have a geriatric bent on everything. But even when focusing on the margins, my needs were left out. Young, Asian, and cancerous, I was a racial minority within a minority population of young adult cancer patients – a disregarded minority within a minority.

Often, in efforts to be culturally responsive, clinical practice addresses the needs of the burgeoning Asian American patient population by making things available in various Asian languages – language access is considered tantamount to health equity. Although language is indeed hugely important for those with limited English proficiency, it is not the panacea for the complete set of challenges facing Asian Americans who seek health care.

The problem in my story of pulmonary malfunction is that my race was excluded from research studies that informed clinical practice – despite the fact that patients of my race make up a sizeable portion of that hospital’s patient population, and their very own clinicians have an educated hunch that being Asian makes a difference. Race matters in the treatment and care of young adult cancer patients, in concrete ways that are crucial to life after diagnosis … and I haven’t even gotten into more directly life-threatening topics, like the intersection of race and bone marrow transplants.

In her viral TED Talk, acclaimed writer Chimamanda Ngozi Adichie warns against telling a single story about any given group of people by saying, “Show a people as one thing, as only one thing, over and over again, and that is what they become.” There is no single adolescent and young adult (AYA) cancer story. If the AYA cancer movement is driven by the unmet needs of everyone diagnosed with cancer between ages 15-39, then it must lead the oncology community away from stereotypical thinking about patients, and demand responsiveness to the diversity of issues faced by the socially and culturally diverse AYA patient population. It makes logical sense that the AYA movement establishes itself as a diverse, multi-issue movement, because cancer is lived through real world contexts by real life young people, who are impacted by social status. Whether I am a cancer patient in the minority or majority in terms of race, class, gender, sexual orientation, or whatever … #AintIaSurvivor too??

We need equal treatment in the social justice sense. When cancer care providers say they treat all patients equally, we need them to stop and define what that means. Are they actually providing each patient with the same quality of care, or are they simply treating all patients as if they’re white? It’s not about asking people to be nice to us, but demanding that we get the same quality and access in cancer care. We need to shout the issues of minority cancer patients and shape the AYA cancer movement into one that truly represents everyone struggling after a diagnosis, especially in high-visibility spaces.

To this point, I’m speaking alongside Eric Galvez of mAssKickers.org and other cancer-patient-turned-advocates from communities of color at Stupid Cancer’s upcoming 2016 CancerCon in Denver. Our panel presentation, Survivorship in Communities of Color: You Are Not Alone, happens on Sunday, May 1st at 9:00AM. Show out if you can, or check my blog at www.jadegangster.com. I’m @jadegangster on Twitter.

If you’ve got something to say about being a minority young adult cancer survivor, please tweet it out with #AintIaSurvivor. 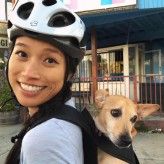 How To Create Natural Brows During Hair Loss
Interview With Cancer Survivor Erinn!