Let’s Talk About Male Breast Cancer, It Does Exist! Let’s Talk About Male Breast Cancer, It Does Exist!

A few famous men who have battled breast cancer: Peter Kriss: That’s right! The drummer of the iconic rock band, KISS, is a breast cancer survivor. He was also the first man to publically admit on TV that he had breast cancer.

Richard Roundtree: Better known as that 70’s ace detective in the movie, Shaft. He was also in Roots, and briefly in Beverly Hills, 90210.

Rod Roddy: You know his voice as he was the announcer on The Price is Right.

Below is my friend Alan Blassberg, director of the award winning documentary Pink and Blue, Colors of Hereditary Cancer. And yes, he is being felt up by David Grohl of the Foo Fighters and formerly of Nirvana. Alan pushes for men to be included in the breast cancer discussion and is a champion for men’s health rights. Dave Grohl seems to be a fan as well! Check out the full article about this documentary in Forbes.

So how does any of this relate to me? My father has the BRCA2 (Breast Cancer and Ovarian Cancer) mutation. He was the one that prompted me to go for my own genetic testing. I inherited my BRCA2 mutation from him. Many people, doctors included, are not aware that men can pass the BRCA genetic mutation down to their children, and they are also unaware that men can and do get breast cancer.

Mutations can be inherited from either parent and may be passed on to both sons and daughters. Each child of a genetic carrier, regardless of sex, has a 50% chance of inheriting the mutated gene from the parent who carries the mutation. As a result, half of the people with BRCA gene mutations are male, who would then pass the mutation on to 50% of their offspring, male or female. (Wikipedia)

It is just as crucial to learn about your paternal side of your family tree. If you only check with your mother’s side of the family, you are missing 50% of the information needed to make informed decisions about your health.

People with whom I’ve shared my story are SHOCKED to learn that I inherited this from my father. Men seem to be forgotten and are often overlooked. I know this firsthand because, until 8 years ago, I had no idea about my father’s side of the family. I didn’t know that his mother passed away of ovarian cancer in her 40’s or that his aunt passed away of breast cancer in her 40’s. It was only when his first cousin was diagnosed with ovarian cancer that I learned cancer was rampant throughout my dad’s side of the family.

When you hear of BRCA mutations, you hear about the increased risk of breast and ovarian cancer and the effects the mutation has on women. However, a mutated BRCA gene also increases the risk of other cancers such as fallopian tube cancer, peritoneal cancer, pancreatic cancer, melanoma, along with other skin cancers, prostate cancer and, of course male breast cancer.

Check out the BRCA fact sheet from cancer.gov.

Compiled from BreastCancer.org, possible symptoms of breast cancer include:

• a lump felt in the breast;
• nipple pain;
• an inverted nipple;
• nipple discharge (clear or bloody);
• sores on the nipple and areola (the small ring of color around the center of the nipple); or
• enlarged lymph nodes under the arm.

So ladies, I implore you to talk to the men in your life, especially if you have a family history of any of the cancers mentioned above that are linked with BRCA mutations. Men, take control of your health, ask questions about your family history, be informed. Please start a conversation that can save a life. Knowledge is Power!
Much Love
Karen 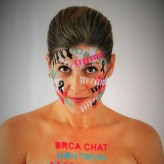 Welcome Jamie!
Have A Joyful Weekend