How Knitting Saved My Life

I was asked what was something that helped me get through my cancer diagnosis and treatment. Several things did help, journaling my feelings, talking to other cancer survivors (you’re a survivor from the moment of diagnosis!) and keeping as active as possible even if it was just getting out of bed and sitting up in a chair. But the number one thing that both saved my life and my sanity was my knitting. During the months of chemotherapy I finished five hats, a cowl and a scarf. I started but never finished two sweaters and a pair of socks. Knitting gave me a purpose, a way to mark the passage of time, and most of all an outlet for my pent up anxiety and anger. Knitting went from something that I would do most days to something that I had to do every single waking moment. If I knit fast enough, I could outpace my cancer’s growth. If I bought enough yarn and had enough projects planned, I could keep death at bay. St Peter couldn’t take me away, I had a sweater to finish first!

Chemo made time slow horribly down. If I had something to work on, my day felt like it went by marginally faster. I would wake up at 5:30 am from a fitful night’s rest and just knit until the sun rose. If I had something to make, I could say that I did more than just lay in a hospital bed hooked up to an IV. My good days were ones where I knitted endlessly. My bad days were marked by stitches rather than inches. Stabbing my knitting needles through the yarn became my rosary. The rhythmic click became at once soothing and my fight song. I would knit to examine my feelings and to gain distance from them. It was impossible to knit and cry simultaneously so I chose to knit. My world was suddenly much uglier and angry but now I had a way to bring some color and beauty into it.
Knitting helped to remind me that I had a modicum of control in the world and that I could grow something pleasurable. Every day that I made a stitch was a day that I brought beauty into my world even if my hands were numb.

The drive to create also became a beacon of hope. It was a reason to keep going through chemo. I had still many more yards to knit. And I still do. There’s still more beauty for me to knit, if cancer didn’t stop that, nothing else will. I am a knitter, I can do anything.

Vanessa is a martial artist, crafter and blogger living in Minneapolis Minnesota. While she doesn’t knit as much as she did, she keeps her hands busy by making plush internal organs for Survival Organs. You read more about her adventures in survivorship at Mixed Martial Arts and Crafts. 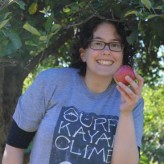