Lacuna Loft is excited to continue introducing more young adult voices! These great folks represent a variety of perspectives on the myriad of topics covered here at Lacuna Loft. Before everyone starts really getting into the nitty-gritty of all they have to say, we wanted to introduce them a bit. Without further ado, here is Miguel!

I am a time/space pirate stranded in this strange planet until your primitive culture perfects time travel.  I spontaneously appeared as a newborn in the country of Mexico, (Monterrey, Nuevo Leon for those of you interested in minutiae)  roughly 37 years ago.  I am not using my Earth name to protect the identity of my loved ones (plus the government wants my DNA for my unnatural healing abilities).

Last year I was diagnosed with a space virus known as Thyroid Cancer in July (my throat was extra lumpy in June checkup so I got an ultrasound, then a veracyte biopsy).  I had a full thyroidectomy in August, followed by a low/moderate dose of radioactive iodine in September.  The full-body Magnetic Resonance Imaging scan in October of last year still showed “hot” (as would be expected) but as of April 13 of this Earth year, I was told I have No Evidence of Cancer.  In jest, I say I beat Cancer like Rocky Balboa beat the Russian.  (“I must break you”?  – I don’t think so, pal!!!)

By trade, I am a Scientist (of the Computer variety) with a Master of Business Administration in Executive Global Management.  Unfortunately, I lack the soulless detachment that Corporate Capitalism requires so I dedicate my time to small-paying gigs in Software Verification for large corporations, privately-held firms and startups.  I hope to one day lead a not-for-profit organization dedicated to help immigrant children, Cancer fighters/survivors/caregivers and the homeless.

Stay tuned for more harrowing tales of woe and torment!!!

PS Volunteer as much as you can!  There is a sublime joy in giving selflessly without expecting anything in return. 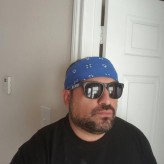 Tell Your Community About Lacuna Loft
How Books Became My Escape