These Boots Are Made For Kicking Cancer In The A$$

These Boots Are Made For Kicking Cancer In The A$$

December 14 was my three year diagnos-aversary.

In 2012, I was 33 year years old and a stay-at-home mom with two small boys, ages 2 and 5. Life was good, until I found a lump in my breast. My first thought was, “Holy crap, this is breast cancer.” And my heart just stopped. It’s strange, but I knew immediately it was breast cancer. I guess it was just a gut feeling. My doctor wasn’t so sure. She told me not to worry because, she explained, since the lump was painful, it most likely wasn’t cancer but a cyst. Just to be on the safe side, she sent me to have an ultrasound.

The ultrasound revealed a mass but my doctor said it could be just fibroid adenoma. Again, to rule out cancer, my doctor scheduled a biopsy. For everyone else, the date 12-12-12 was a lucky day, but not for me. That was the day of my biopsy. I was told the results would be ready, two days later, on December 14. I woke up that morning and had my first ever panic attack. I told my husband, Brian, that he had to call in sick to work and stay home with me. He asked why and I told him because the doctor was going to tell me I have breast cancer. I was so freaked out that I called the doctor’s office three times and each time, they told me the biopsy results weren’t back yet. Then I got in my car and drove to the doctor’s office. They still didn’t have the results, but they did give me a prescription for Xanax to help with my anxiety. Finally, at three o’clock in the afternoon, I got the call I knew was coming and the official diagnosis of breast cancer. One year later, on December 14, 2013, I was adjusting to the new norm. I had 12 surgeries that first year, four rounds of chemotherapy, had my ovaries removed, and endured a painful and life-threatening reconstruction fail, but I was cancer-free. That’s when Brian gave me my first diagnos-aversary gift of a pair of shoes. He told me it was to celebrate how I kicked cancer’s butt. The next year, Brian bought me a pair of pink Uggs…another year I kicked cancer! This year, for my three-year diagnos-aversary, my husband got me a pair of Sorel boots. I look forward to many more pairs of shoes coming my way in the future as I continue to kick cancer to the curb! 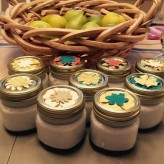 Have A Welcoming Weekend
#YARally