8 Years Of No Good Cancer 8 Years Of No Good Cancer

It was a Friday afternoon in late November, two months after my wedding and the day before my husband and I were planning to go pick out our Christmas tree. My doctor said those words, and then she made two calls, and just like that, I had appointments with a surgeon to remove my thyroid the day after New Year’s and an endocrinologist to manage my care forevermore after the surgery.

My husband and I drove home in mostly stunned silence, but for my confused questioning: “I thought I was doing everything right. I run. I don’t smoke. I eat blueberries, for god’s sake.” I knew all too well even before that day that cancer doesn’t discriminate, but I still never expected that it would happen to me.

My thyroidectomy was a little more than a month later, but on November 30, 2007, I became a cancer survivor. I felt physically just the same as I had the day before — which is to say, completely fine — but my life had been separated into two distinct periods, one before cancer and one after.

A couple of weeks later, I went to my first thyroid cancer support group meeting. I knew by then that thyroid cancer was then, and is now, one of the fastest growing cancers, particularly among women in their 30s and 40s. More than 60,000 people will be diagnosed with the disease in 2015; most of them will have papillary thyroid cancer, the same type that I did. Most of us won’t die of thyroid cancer, but it will be with us, in some form or fashion — via daily drugs to compensate for our missing thyroids, quarterly and yearly lab tests, the worry when we find an unusual lump — for the rest of our lives.

But there was a lot more that I didn’t know that day. I didn’t know that the radioactive iodine treatment I’d receive to destroy the thyroid tissue that my surgery left behind would damage my salivary glands and leave me with permanent dry mouth. I didn’t know that that treatment wouldn’t kill all the cells, and that just two years later, another cancerous nodule would grow in the same spot that the first one did, requiring another round of treatment. I didn’t know how to help my family and friends manage my diagnosis and treatment and all its aftermath.

I didn’t know that too many people — some doctors included — continue to think, and to tell thyroid cancer patients, that thyroid cancer is “the good cancer.”

There is NO good cancer.

I haven’t defined myself by cancer in the last seven years, but that diagnosis changed my life. Some of those changes have been tough ones; I’ll never take even a routine bloodwork appointment lightly again. Other changes have been for the better. The word “cancer,” even when it’s preceded by “fully treatable,” has a way of hammering home the message that life is short.

I kept up my blueberry-eating habit, but I also traded in a stressful job for one that’s closer to my true loves of writing and editing, with more time for the people and priorities that matter most to me. That change altered my career trajectory — for the good, I’d argue now, especially as I look at my two kids, both born since my recurrence. I’m not sure I would have made it without the nudge — no, the kick in the butt — that thyroid cancer gave me.

It’s been five years now since my last round of treatment, and I’ve pivoted to figuring out life after cancer, though “after” implies a greater level of completion than I feel. I still have a lot to learn about thyroid cancer and what it means for me and my family — lessons I hope I’ll have a lifetime to learn. In the meantime, I’m proud and grateful to call myself a survivor.

Find out more about thyroid cancer, including how to conduct your own neck check, as well as information for patients and caregivers, at the Thyroid Cancer Survivors Association.

Michele is a wife, mom of two, cancer survivor, and writer living in Washington, D.C. She blogs about life after cancer and infertility — as well as random musings on life as a transplanted Bostonian, a devoted fan of the Red Sox, and an infrequent and slow runner — at A Storybook Life. You can follow her on Facebook and Twitter.

Have you heard the phrase, “you have ‘the good cancer'” too? 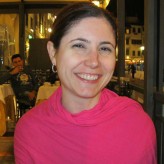 YACancer Vloggers: the HouseWifeSnob
Have A Handsome Weekend